One Year Of Article 370 Abrogation - Has The Burden Lightened Enough?

Today, August 5, 2020 marks first anniversary of one of the most controversial decision in India’s history i.e. Narendra Modi led BJP government to scrap the special status of Jammu and Kashmir (J&K) and abrogate Article 370 and 35A from the state splitting it into two Union Territories. On this occasion, the Jammu and Kashmir Bharatiya Janata Party (BJP) organized functions at different places in the region and hoisted tricolor at its party office. Locals in Handwara town celebrated it through a two-day annual festival 'Bangas Awaam Mela' commencing on August 3 with the grand finale on August 4.

Authorities in Kashmir took all the security measures and a two-day curfew was imposed in the valley to suppress any public revolt or terrorist attack in wake of intelligence inputs on probable violent protests by separatists and terror groups.

For those oblivious, lets first take a sneak peek into Article 370 and 35A and why was the erstwhile state given a ‘special status’ in the first place. At the time of accession of Jammu & Kashmir in 1949, it was agreed with the Constituent Assembly of the state that articles of the Constitution of India that gave powers to the Central Government would be applied to the valley only with the concurrence of the State's constituent assembly.

Article 370 was a 'temporary provision' inserted on 17 October 1949 in the Indian constitution, its applicability was intended to last till the formulation and adoption of the State's constitution and it gave power to J&K to have a separate constitution, a state flag and autonomy over the internal administration of the state. Article 35A was introduced through a constitutional order in 1954, under Article 370 and empowered the state to define "permanent residents" providing special rights and privileges to those residents.

However, after the State's constituent assembly dissolved itself on 25 January 1957 without recommending either abrogation or amendment of the Article 370, it attained a deemed permanency in the Indian constitution with any succeeding government failing to annul it.

Why has the government abrogated it? – Benefits

Article 370 was an undemocratic anarchist legislation that discriminated against women and minorities and its abrogation restored right to property for many Kashmiri women and children, thus becoming an instrument for woman empowerment.

More than 164 laws got repealed and 170 more Central laws became applicable in the Union Territory.

This move benefitted West Pakistani migrants who had migrated to J&K at the time of partition, and put an end to the discrimination against marginalized communities like the Valmikis, Gorkhas, Dalits and LGBTQIA individuals.

Incidents of stone-pelting in the valley drastically came down, Pakistan-sponsored protest rallies are now unheard of. As per a report by home ministry, terror-related activities have reduced by around 36 percent in Kashmir after the scrapping of Article 370.

Its annulment gave the people of Kashmir access to government programmes such as reservation, right to education and right to information and opened up several investment opportunities. 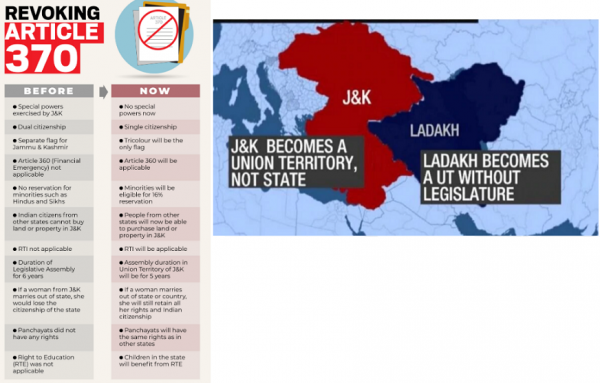 On the day of Abrogation

August 5 last year redefined everything for the people of Jammu and Kashmir removing the ‘burden’ of ‘special’ treatment from them. On the day of announcement, before midnight, the city was cordoned off and communication channels were completely blocked; be it mobile phones, the internet or even landlines. All possible security measures were taken to quash any public revolt - massive troop buildup, the evacuation of non-locals, tourists and Amarnath pilgrims and so on. Several leading Kashmiri politicians were taken under "preventive detention", including the former chief ministers Mehbooba Mufti and Omar Abdullah. While Omar Abdullah was released earlier this year, many of them including Mehbooba Mufti continues to be under house confinement even to the date. 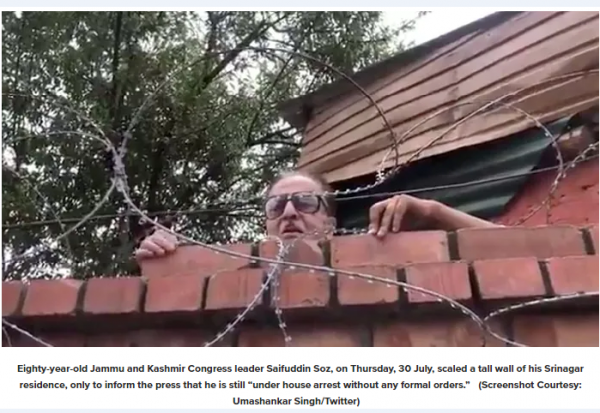 The reaction in the Kashmir Valley got muted by cut- off communication and arrest of leaders. Anything contrary to the view of government has been declared as fake news or anti-national, according to a new media policy. Several petitions have been made in Supreme Court to decide on the constitutional validity of the colossal move.

As per official, after the abrogation of special status to the erstwhile state, the Jammu and Kashmir administration has adopted the concept of 'Naya Kashmir' and its focus has been on ten fields, especially,

To enable this, the Anti-Corruption Bureau has been brought under the direct supervision of Central Vigilance Commission. There has been an increased emphasis on projects in railways, power, industrial set-ups, land registration, digitization etc. On August 4, 2020, a day ahead of the anniversary of abrogation, Union Territory (UT) government claimed 100 per cent achievement in seven schemes, namely:

One year since the nullification of special status to the state, people of Kashmir are suffering from devastated economy, education, social and political structures. Their woes have all the more aggravated by lockdown during COVID-19 pandemic with businesses turning into Non-Performing Assets. On top of that it even more difficult now to survive with competition from outsiders setting up their business in Kashmir.

The people of the valley constantly demand better infrastructure, jobs and internet connectivity like rest of the country. The internet was partially restored after the Supreme Court on January 10, 2020 held that access to the internet is a fundamental right, the authorities obliged by setting up government-controlled internet kiosks, with firewalls permitting only some websites and forbidding social media.

Some believes that border situation and hostility from Pakistan has even increased post August 5 last year.

As per Senior PDP leader Naeem Akhtar, “Delhi has decimated decades of our investment in peace and democracy. At the cost of mere political gains for one party, all norms of democratic society have been infringed upon… For many of us it’s a long fight for survival and dignity in a newly demonetized democracy”

As per the Human Rights Watch, an international non-governmental organization, “the Indian government-imposed clampdown in Kashmir is being slowly and gradually eased of restrictions, but to a large extent continues to fail in preserving the rights of the Kashmiri people”

This significant move intended for peace, justice, economic and social development of the Union Territories of J&K and Ladakh has not yet been able to demonstrate its full impact. Only time will tell if the BJP government was right in doing so and if it has been able to fully integrate Kashmir with the rest of India or rather has further widened the gap.

How Dharavi is surviving after become a Coronavirus hotspot in Mumbai

Ranveer Singh is ready to rock