On late Friday evening, August 8, an Air India Express ‘Vande Bharat Mission’ flight IX-1344 with 191 people on board, crashed at Karipur Airport in Calicut, also known as Kozhikode, a city in the southern state of Kerala. The Boeing 737 repatriating Indians stranded by the pandemic crisis from Dubai skidded off the tabletop runway amidst heavy rainfall and broke in two after landing, killing at least 17 people, including the pilot and co-pilot of the aircraft. 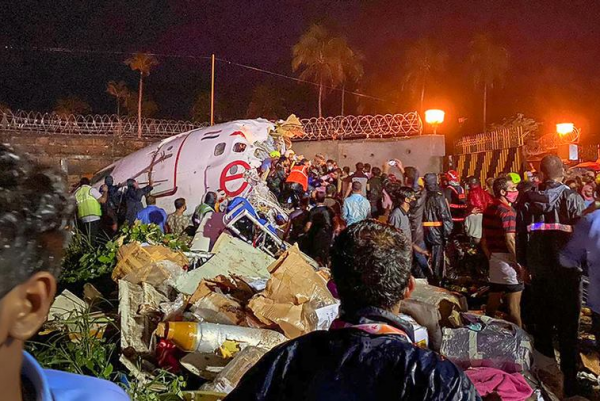 Details of the Crash

The plane attempted to land just before 20:00 local time (15:30 BST) on Friday, as heavy monsoon-season rainfall lashed Kerala. The Directorate General of Civil Aviation (DGCA) said the plane fell into a valley and broke in two after skidding off the end of the runway. No fire was reported at the time of landing, the aviation regulator said.

“It was a Dubai to Kozhikode Air India Express flight. It made an over-speeding landing, overshot the runway, and fell into a valley. The aircraft has broken into two parts but it is being reported that it has not caught fire, which increases chances of rescue” said Arun Kumar, chief of directorate general of civil aviation (DGCA).

In a tweet India's Civil Aviation Minister, Hardeep Singh Puri, said the aircraft "overshot the runway in rainy conditions", then leaped down a 35ft (10.6m) slope, before breaking in two pieces.

Data from a popular global flight tracker website, Flightradar 24, shows that the aircraft appears to have attempted to land twice at the airport. As told by survivors to media channels, the airplane went up and down many times before landing and the disaster occurred after the plane had clearly touched the runway.

As per sources, the aircraft VT-AXH attempted its third landing with high approach, probably due to strong tail winds, and landed beyond the touch down point on the runway due to which it could not stop in time and fell in a valley. The impact on the front section of the fuselage was very strong which broke it into two.

There are three tabletop airports in India from where scheduled flights operate, namely Mangaluru, Kozhikode and Lengpui. A tabletop runway is picturesquely located at a high altitude with one (or both) ends of the runway adjacent to a steep drop. Such runways are famous for their beauty and they often create an optical illusion that requires a very precise approach by the pilot.

According to a court of inquiry report on the 2010 Mangaluru crash, prepared by former IAF vice-chief of air staff Air Marshal B N Gokhale and a team of experts, “these airfields require extra skill and caution while carrying out flight operations” due to “the undulating terrain and constraints of space”. “The hazard of undershooting and overshooting, in particular, can lead to grave situations,” the report said.

At the time of Kozhikode crash, Kerala was facing heavy rains due to the seasonal monsoon. As per experts, of the four airports in Kerala, the Kozhikode airport has the shortest runway and has suffered serious damage in incessant rain in the past. Air Safety expert Captain Mohan Ranganathan said he had detailed in a report long ago that Kozhikode airport was not safe for landings.

"The runway has a steep downslope, no safety area. They were warned nine years back and given proof but they continued to operate and declared the airport safe…There are 200-feet deep gorges on both sides of the tarmac. It is a very steep downslope. Airlines have been operating blindly there," said Captain Ranganathan. “If there are casualties, then it is murder, a criminal offence”, he added.

This is the second tabletop runway which is now involved in an airplane crash reminding the incidents at Mangaluru runway.

In May 2010, an Air India Express flight IX 812 crashed at Mangaluru International Airport killing 158 people when the airplane overshot the tabletop runway and crashed. Following landing errors by the pilots, the aircraft fell off the cliff at the end of the runway and burst into flames.

A similar incident happened in July 2019 in Mangaluru when an Air India Express aircraft travelling from Dubai deviated off the taxiway skidding to a halt on a patch of mud and grass. There were 183 passengers on board the plane and all were safe after the incident.

Unfortunately, Calicut International Airport is no stranger to accidents, some of them occurring at the time of landing being:

Reactions and condolences poured in from political leaders, government authorities and other who’s who of the society.

Kerala Chief Minister Pinarayi Vijayan said, “I have instructed the police and the fire force to take urgent action in the wake of the plane crash at the Kozhikode International airport (CCJ) in Karipur.”

In a series of tweets, India's Civil Aviation Minister, Hardeep Singh Puri said a formal inquiry would be carried out by India's Aircraft Accident Investigation Bureau (AAIB). “Two investigation teams of professionals from AI, AAI and AAIB will leave for Kozhikode at 2 am and 5 am (Saturday).Everyone has now been rescued from the aircraft. Rescue operations are now complete,” Puri said.

Rescue operation is complete at the site. Several injured passengers have been rushed to nearby medical facilities. All doctors who were on leave at Medical College hospital in Kozhikode have been asked to join back for duty. Health Minister K K Shailaja and Kozhikode Collector S Sambasiva Rao has made a public appeal that those from containment zone should not take part in rescue and donate blood.

Pakistan cries for Kashmir again at the OIC summit

India, the world's biggest producer of jackfruit, is capitalising on its growing popularity as a "superfood meat"

Kolkata airport is operational now after two months of lockdown