India's COVID-19 Fiscal Stimulus - Has The Government Been Liberal Enough?

The 2020 coronavirus pandemic has slumped the world economy into one of the greatest financial crisis of modern civilization uncovering numerous hidden flaws in how the economies all over the globe have been functioning so far. India is no exception to this and as stated by the World Bank, the current pandemic has "magnified pre-existing risks to India's economic outlook".

Measures announced by Indian government to boost the economy

A: On 18 April, the government changed India's foreign direct investment (FDI) policy to protect Indian companies from "opportunistic acquisitions" during the COVID-19 pandemic. While the new FDI policy does not restrict markets, the policy ensures that all FDI from countries that share a land border with India will now be under scrutiny of the Ministry of Commerce and Industry

B: The much talked about, Rs 20 Lakh crore first Indian fiscal stimulus package announced on 12 May as part of Atmanirbhar Bharat Abhiyan aimed at making the country “self-reliant”. Below image gives a detailed break-up of this package, major points being:

C: The RBI measures some of which already covered with announcement of Atmanirbhar Bharat Package includes:

Further, as a result of the meeting of the Monetary Policy Committee on 22 May, the RBI Governor

D: On 2 June, mobile manufacturing incentives were offered by the government to mobile manufacturers that includes production-linked incentive on goods made locally in India. Five Indian firms would also be selected for the scheme.

E: On 20 June the Garib Kalyan Rojgar Abhiyaan was launched to tackle the impact of COVID-19 on migrant workers in India.

The economic packages announced so far by government are a blend of reforms including direct cash support, support to stressed businesses to restart business activity and safeguard jobs, changes in FDI policy, privatization of the power sector, infrastructure building and Ease of Doing Business (EoDB) measures.

Impact of Economic Packages so far

As per reports, by 2 July, a number of economic indicators started showing improvement as compared to previous months. On 24 July the Finance Secretary of India said the economy is displaying signs of recovery at a faster rate than anticipated, while the Economic Affairs Secretary said that he expects a v-shaped recovery for India.

However, this should not be viewed as an indicator of all is well in the paradise! As per a statement by former Reserve Bank of India (RBI) governor Raghuram Rajan on 8 July “Yes, we do see a little bit of a V-shaped recovery, but that's because we went down so far and the initial comeback is just the opening. What is really needed is a full recovery and that's going to take a very long time"

The World Bank has warned in its draft India Development Update (IDU) report that the fiscal impact of the economic stimulus package was limited by way of central government spending and the country is at "risk of losing its hard-won gains against poverty”.

As per experts, there are two major problems with the Indian fiscal stimulus package:

As per reports, only a small percentage of entire package is an actual injection of money into the economy to boost spending power, being in total Rs 662.5 billion. This includes tax refunds and provident fund rebates which amount to Rs 627.50 billion, leaving only Rs 3.5 billion in direct spending.

The government claims that its Atmanirbhar Bharat Package constitutes approx. 10% of GDP but most of the banks, brokerages and ratings agencies have said the package falls way too short of the claim and works out to around 1% which is not enough to address the large-scale devastation wreaked by the pandemic on the economy. Below Image compares India’s fiscal measures with other major economies in the world. 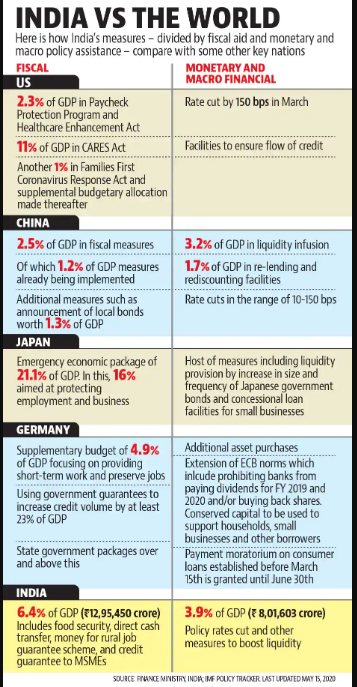 The National Council of Applied Economic Research (NCAER), a think tank, estimates that India may need an economic package equaling 3 per cent or more of the GDP above and over already provisioned in the Union Budget.

Reports state that most of the announcements in Indian economic package are related to supply and did not address short term demand concerns, which may in turn pull down the economy even more.

What can be done to improve the situation?

As per economists, the only possible alternative with government is a direct monetization of the deficit.

Without any major increase in demand and borrowers, even with the substantial decrease in lending rates, commercial banks consider it better to park their money with the central bank using its reverse repo window.

As per the latest edition of EY India’s Economy Watch report, a second round of fiscal stimulus in the latter part of the financial year with more focus on capital expenditure and a borrowing-based full implementation of Rs 111 lakh crore is needed to restore growth and generate tangible employment.

CA Vijay Kumar Gupta, former Central Council Member of the Institute of Chartered Accountants of India (ICAI), said, “It is too early to assess the impact of economic stimuli announced so far. However, more fiscal and monetary interventions will be required to bring the economy back on track.”

As concluded by Dr. Subramaniyam Swamy, an MP nominated by the President for his eminence as an economist “The economy will require real astuteness, intuition and deep knowledge of macro-economics to prevent a crash of the Industrial and Service sectors and cause a monumental misery for the Indian people... Unless we revamp our economic policy clearly and explicitly in terms of Objectives, Priorities, Strategy, and Mobilization of Resources, there is no hope of reaching the GDP target of $5 trillion even by 2030.”